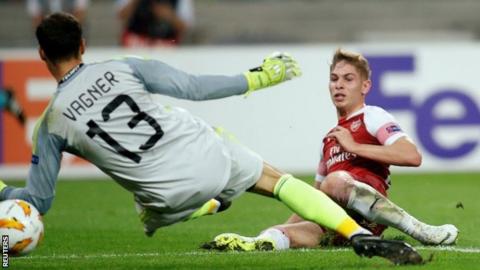 Teenager Emile Smith Rowe scored his first Arsenal goal to help the Gunners to an eighth win in a row with victory against Qarabag in the Europa League.

Sokratis Papastathopoulos and Matteo Guendouzi scored either side of Smith Rowe’s strike to also register their first goals for the club.

Sokratis, who joined from Borussia Dortmund in the summer, put the Gunners ahead in the fourth minute when he diverted Nacho Monreal’s header in at a corner.

Teenager Guendouzi, another summer signing, added the third in the 79th minute, finishing a slick move with a low shot into the bottom left corner.

Arsenal did not have all of the play in Baku and goalkeeper Bernd Leno had to make good saves in either half.

The Gunners top Group E with two wins from two games and they have now won eight consecutive games in all competitions for the first time since April 2015.

Londoner Smith Rowe was making his full European debut in the game, having come on as a substitute in Arsenal’s opening Europa League match for his first competitive senior appearance.

The highly-rated England Under-19 international made his first start of the club in the Carabao Cup win against Brentford last week.

In Baku, the forward started on the right of a front three with Danny Welbeck through the middle and Alex Iwobi on the left.

Smith Rowe’s goal included all three, with Welbeck winning a flick-on before Iwobi raced downfield and played a well-timed pass for the youngster to finish.

Smith Rowe was lively throughout his 65 minutes on the field before he was replaced by Mesut Ozil.

The youngster almost scored early on when sliding in at the back post to meet Sead Kolasinac’s cross from the left but failed to divert his effort back on target.

The Englishman often drifted in off the right flank and was twice picked out in good positions near the penalty spot but failed to finish.

Arsenal show they have depth

In total, Arsenal manager Unai Emery made nine changes for the match but still fielded a team with eight full internationals.

At times they struggled defensively in the new formation but goalkeeper Leno was on hand to keep out their opponents.

The German, who looks set to have a run in the team with Petr Cech injured, saved well low down twice in the first half and in the second smothered a close-range effort before later diving high to his right to save from distance.

Emery won the Europa League title three times when in charge of Sevilla and showed how seriously he is taking the competition in his first season at Arsenal when introducing both Ozil and Alexandre Lacazette in the second half.

His side are now in a dominant position in the group, level on points with Sporting Lisbon but six clear of third and fourth place, with the top two progressing.

For now, against lesser opposition in the group stage, it looks as though Arsenal have the squad depth to deal with both domestic and European fronts.